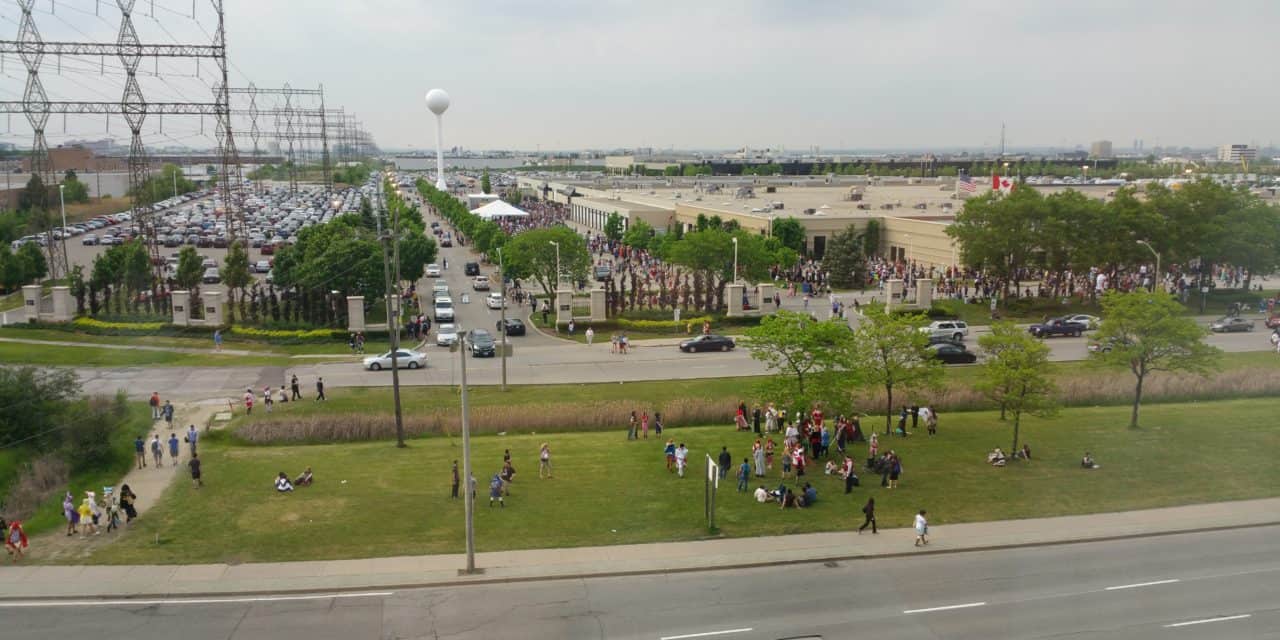 According to Animecons.com, in 2017 Anime North is the 4th largest attendance rate in all of North America. That’s more than other big name cons like Otakon and Sakuracon! So I thought it would be interesting to do an Anime North review and compare the con to other large conventions of similar size.

Are you on the fence of whether you should attend Anime North? Especially with newer conventions around such as YetiCon and large cons with bigger guests like Otakuthon? Well this review will help you decide whether you should go or not!

I’ve been to many different Anime conventions across the continent and I have to say, the setup for Anime North is quite unique.

Unlike most cons that take place in one convention centre, Anime North is spread out in 3 buildings, across a large area where you have to actually cross a bridge that goes over a highway to access the entire convention (i.e. the hotel with the gaming facilities). This is TERRIBLE for anyone with a physical disability. For those people, they either cannot access the area across the bridge, or have to wait a long ass time for the shuttle bus to get there.

Last time I heard, you have to wait 30 minutes for the shuttle bus to arrive, which is WAAYY too long. Luckily, you can take public transit (TTC) from one part of the convention to the other (That’s what I actually do). The bus comes every 5-10 minutes, and since I always have a transit pass, it works very well for me.

Check out this video below by Fire And Steel to see how the area of Anime North looks like:

Another unique aspect is the setup of passenger flow to reach the convention centre. For those who haven’t been to Anime North, it’s very strange how you get inside the convention centre – the front entrance is actually closed! Everyone has to walk all the way to the back of the building to enter AND exit the building – through this huge parking lot. And coincidentally, there’s where the life and activity of Anime North congregates.

The parking lot is like a street festival for geeks and attendees. And as a Canadian who puts up with crappy weather 75% of the year, I find it AMAZING when you put Otaku street festival+beautiful spring weather together.

That’s what I enjoy about Anime North – the focus on what’s happening outdoors. The convention is as close to an outdoor Weeaboo festival as I’ve ever been. I don’t know if the organizers of AN created this setup on purpose. But if they did, good on them! I also don’t know if cosplayers and attendees appreciate the outdoor atmosphere as much as I do. But it’s definitely unique compared to other conventions.

When I attend a large Anime convention indoors, sometimes it feels like a big trade show where everyone is trying to hustle like a trading floor for the stock markets. However, at Anime North it really feels like a CELEBRATION of geek culture when you’re hanging around that makeshift parking lot hallway outside of the convention.  It truly is a nice experience.

What if it rains? Of all the years I’ve been to Anime North, I can only remember once where it rained so hard that everyone had to stay indoors to avoid getting wet. And I believe that’s why Anime North implemented the attendance cap; in the event where everyone had to go inside, would all the venues be able to hold everybody and not create a fire hazard?

This is probably the most interesting part of this Anime North review! Simply because how notoriously difficult it is to get a hotel room at this con.

Anime North is probably one of the more affordable large conventions out there. To start, the cost for a weekend pass is $60 CAD at the door. That’s pretty cheap for a convention with over 20,000+ attendees each year.

In comparison to other rates at the door, Anime Weekend Atlanta costs $70 USD, Sakuracon $75 USD. Anime Expo, the largest Anime convention in North America, costs $150 USD for 4 days. And even Fan Expo, also located in Toronto, is $125 CAD for 4 days (And that’s not including extra costs like getting an autograph and photo with a celebrity)!

Alright, maybe AX and Fan Expo is not a fair comparison. But still, the admission price for a 3-day weekend at Anime North is definitely fair and reasonable.

Also, the hotels at Anime North are relatively cheap compared to similarly-sized conventions. If you look at the hotels page for AN, they’re all under $200 CAD a night. I’d say that’s lower than average, at least based on my experience.

In other words, by the time Anime North is over, make sure you book your hotel room before July before they sell out.

UPDATE: As of 2019, Anime North no longer offers wrestling! It makes me sad but I’m sure they had their reasons for cutting out the wrestling. Either way, I will leave the portion where I talk about it here.

This will be the more polarizing aspects of this Anime North review.

Personally, I think the organizers of Anime North do a great job providing a diverse set of programming. You have the standard things like the Masquerade, skit contest, dance/rave and concerts. But there’s also unique programming like the Lolita Tea Party, Doll North (whatever that is), Moonlight Ball Formal Dance, Anime-themed game shows, and even wrestling! Yes, Anime North has live wrestling at the convention, which I totally love!

You might argue that Anime convention and wrestling don’t go together. But you’d be surprised of how many weebs/Otakus are also wrestling fans. Especially in the US. Although it’s still very niche, they actually have photoshoots for WWE cosplays.

I’m also a huge fan of this special feature thing AN does. It’s called Anime Hell. The hosts gets on the microphone, airs a bunch of funny commercial and clips from various Anime, and makes fun of them. It’s pretty damn hilarious. Looking at the website, it looks like this panel only happens at Anime North and Anime Weekend Atlanta.

When I was younger, I used to love this panel called Alicia’s Poképarty.  At the time I couldn’t find anyone to play Pokémon Diamond and Pearl with me, so I was super stoked to be able to battle with someone at the convention. They stopped doing this panel at Anime North sadly. I guess Alicia may have retired or something like that.

Anyways, there’s lots to do at Anime North. So I believe most people won’t get bored at the convention.

One common criticism I always hear about Anime North is the lack of big name guests that show up. For those who read my previous review of Toronto ComiCon, you know I’m not that big on guests. It’s not a huge deciding factor for me. So I can’t comment on this.

One valid argument I do hear however, is that we cannot use the excuse of being located in Canada for why we cannot invite big name guests. A lot of my cosplay friends complain that Otakuthon in Montreal gets huge guests for their convention, despite also being located in Canada. I do remember Yaya Han was a guest at AN a couple of years ago, so perhaps that counts?

If you want to hold a cosplay photoshoot at Anime North, I have good news and bad news. Let’s start with the good. If you’re shooting outside, you’ll have LOTS of room outside in the parking lot of the Toronto Congress Centre. The parking lot is so huge, as long as you stay out of the main walkway where congoers go in and out of the building, you’ll totally be fine.

The bad news is that the scenery and background at Anime North is not ideal at all. In fact, it’s pretty plain and dull. Doing a photoshoot on a patch of grass or on the concrete jungle that is the parking lot isn’t very aesthetically pleasing.

Now that I think about it, I can’t think of any notable photoshoots I’ve seen that have taken place at Anime North. If you do, you can tell the photographer blurred out the boring background. It’s that dull!

And don’t even bother trying to do a photoshoot indoors; the convention centre and hotels are very crowded and I doubt you’ll be able to find a suitable space.

So in short, doing a photoshoot at Anime North is easy but nothing spectacular. Not even close to the levels of beauty you’d get at Katsucon or Collosalcon. It’s not really the convention’s fault; it’s unfortunate that the convention is located in a suburban area near the airport.

Here’s a summary of the things I mentioned about Anime North in this review:

Is Anime North the best Anime convention in Canada? If you’re more into the atmosphere and care more about affordability and annual tradition, then yes Anime North for you.

However, if you’re looking for something new and refreshing every year, I’d say you might find AN underwhelming in this regard. You should check out Otakuthon for that kind of fresh programming every year. But whatever your preferences, I recommend you attend both! We are fortunate here in Canada to have 2 awesome conventions!

I love Anime North. The convention is far from perfect, but AN will always have a special place in my heart. Local Torontonians and Canadians always attend every year. And if you’re from the States, you’ll find it’s a unique convention and easier on your wallet than most U.S. conventions (except for the gasoline, it costs way more up here).

Maybe it’s because it was the first Anime convention I ever attended. Some cons get better or worse over time. AN hasn’t really changed much, but that’s not really a bad thing.

Hopefully you enjoyed this Anime North review. Let me know what you think in the comments!

Which Day Of An Anime Convention Is The Best?